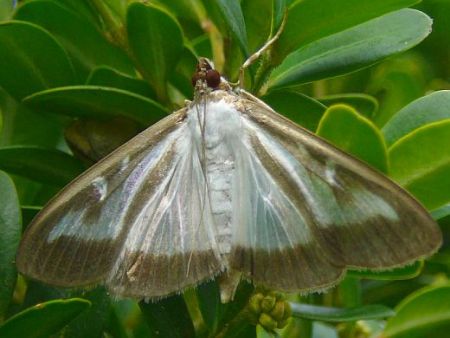 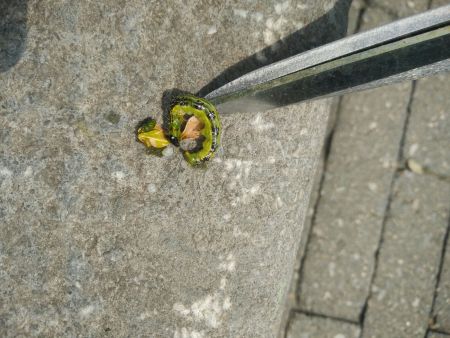 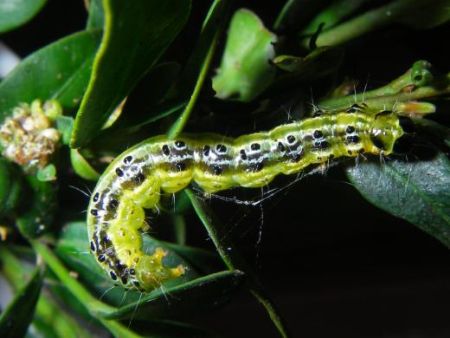 Bright green caterpillars, with a black head, that feed on the leaves of Buxus. This Asian-originated butterfly can reach a size of 4 cm. There are two generations in Belgium: April/May and August.

The Buxus moth (Cydalima perspectalis) is a species of the grass moth family (Crambidae) and was first described by Francis Walker in 1859. This species is native to East Asia and is an invasive exotic species in Europe, first noted on the German/Swiss border in 2006. 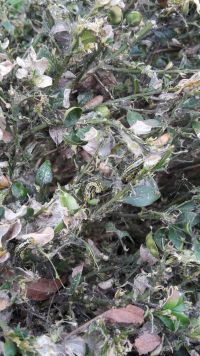 The wings of the Buxus moth are white with a dark edge and have a wingspan of approx. 4 cm. There is also a rare, completely brown variant. Young caterpillars are dirty yellow and only a few millimetres in size, but they quickly grow into bright green specimens with a black head. They can grow up to 4 cm long and are then almost a month old. After the caterpillar stage, they pupate in the web left behind for about 14 days. The moths themselves live only a short 8 days, but each moth can lay up to 500 eggs. Two generations occur in Belgium and the Netherlands. This exotic insect overwinters by way of a spun-up caterpillar between Buxus plants.

The Buxus moth is native to East Asia (Japan, South Korea, China) and was introduced into Europe in 2006 via natural stone packaging wood from Asia, according to research by the University of Basel. Afterwards, it spread rapidly from Germany/Switzerland to the rest of Europe. The first reports in the Netherlands date from 2007 but were still very local. Due to the invasive nature of this species, by 2018 the whole of Europe is infected with this exotic moth. In 2020, we see a general reduction in the pest pressure due to control by natural enemies such as birds, bats, wasps, etc. and, of course, more experience in controlling this pest.

Because we are dealing with an invasive exotic species, alertness is certainly called for. In the country of origin, Buxus, but also other plants, are affected. In Europe, the Buxus moth appears to have a preference for our native Buxus sempervirens, which does not occur in Asia. Other plants could also become affected, but in practice no problems have been observed with other crops.

The young caterpillars eat parts of the chlorophyll but it is mainly the older caterpillars that cause a lot of damage. Adult caterpillars can defoliate an entire plant in a short period of time. Only spider mites remain on the damaged plants. Although the plant may look quite desolate at the time, the Buxus will be freshly green again after 8 weeks, due to its strong recovery capacity. It is important not to let the plant be eaten again. There are two periods when there is a lot of voracity: April and July.

The caterpillars of the Buxus moth can be easily controlled both chemically and biologically. Products based on spinosad (Conserve Garden), approved for organic cultivation, have a long persistence and prove to be as efficient as chemical products.

Products based on Bacillus thuriengensis (not authorised for private individuals in Belgium and the Netherlands, but authorised in the rest of Europe) are particularly effective on young caterpillars. Chemical caterpillars based on lambda-cyhalothrin (Karate Garden) or deltamethrin (Decis) also work well. Professional gardening contractors, holders of a phytosanitary licence, have a wider range of agents.